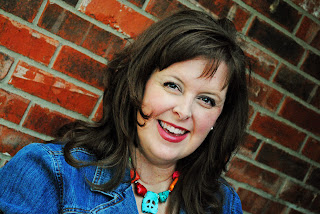 Hi, friends! I’m Kristi from the creative lifestyle blog, ishouldbemoppingthefloor.com.
I am so thankful to Meegan for inviting me over to guest post today. 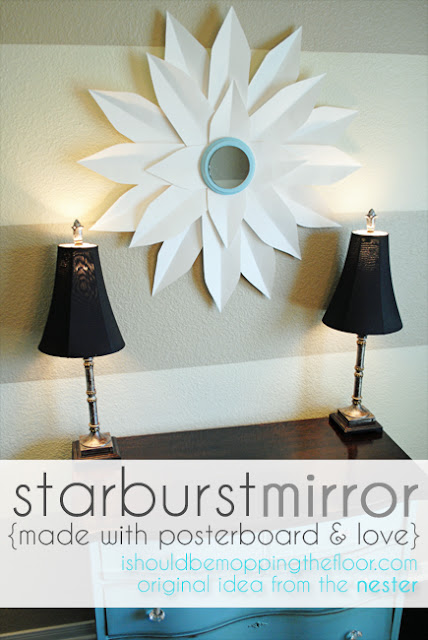 Let me start out by saying that I can in no way take credit for being the creative genius behind this project. As most of you know, The Nester is the orignator of the posterboard Starburst mirror. I have put my own spin on it with my tutorial below. But, you can also find her tutorial here. 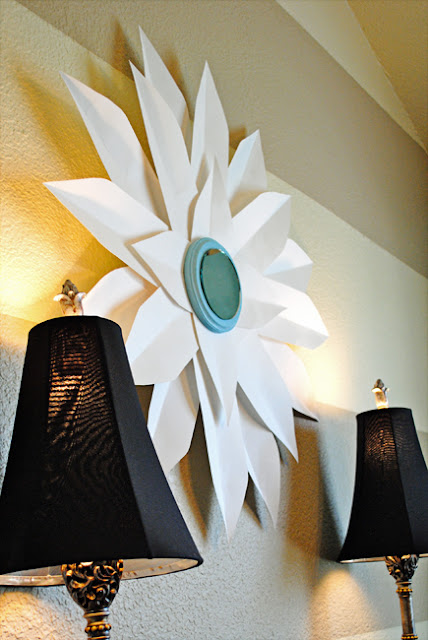 I’m really happy I ran across her tutorial…this was a quick & easy project with fantastic results. I love it when things come together like that. 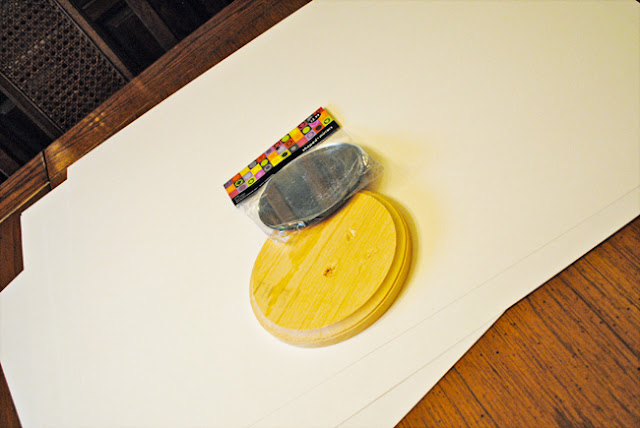 Her mirror used a convex mirror in the middle…but, I couldn’t find anything like that in the size I was needing. So, I made my own mirror…which actually shaved a lot of the cost off of this project. I picked up everything at HobLob. I found the unfinished wooden circle {with already-routed edge} for $1.99, the package of mirrors {it came with two} for $2.99 {and used my 40% coupon on that item} and my five pieces of posterboard {only used four of them} for $.39 each. If you’re keeping track, I spent a total of $5.73 {pre-tax} out-of-pocket. That’s pretty CRAZY {in a good way} if you ask me!

Other items that I needed {but already had}: hot glue gun/glue sticks, paint for the wooden circle, scissors and a little alligator-tooth clip thingy to hang this off of {or you can use a soda tab, like I keep seeing on Pinterest}.

I started by using my {in}famous “oops” blue paint {that’s also used on my dining room drapes as well as that dresser that’s in my dining room….oh, and my kitchen island}. 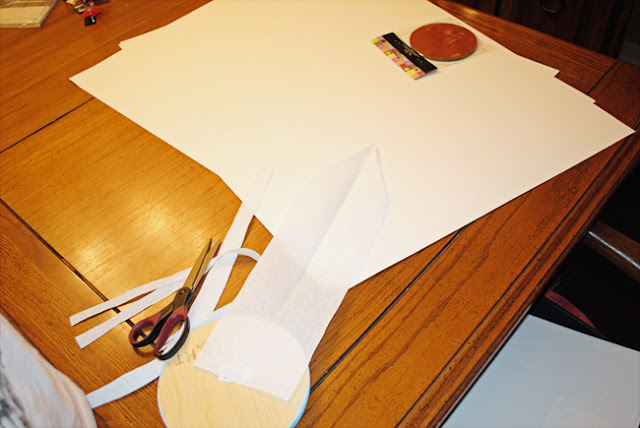 Just like the Nester, I used a paper towel to make a template. It’s about a foot long…but the length didn’t matter…I only used the pointy part. The length was dictated by the width of my posterboards. 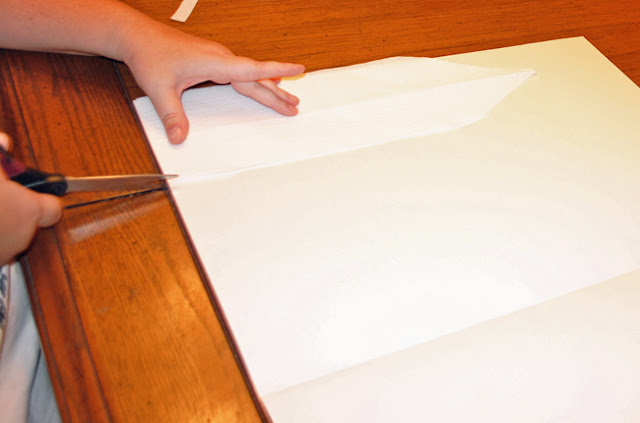 My particular width ended up being the size it was since it fit the back of that wooden piece {as pictured in the photo above this one}. I started by laying it out on my first poster board…I used it as the template to cut my strips. I messed up one piece of board because I folded it in half to try to make it easier…this just made it worse. It’s hard to put into words {that make sense outside of my head}, but trust me. It didn’t work. 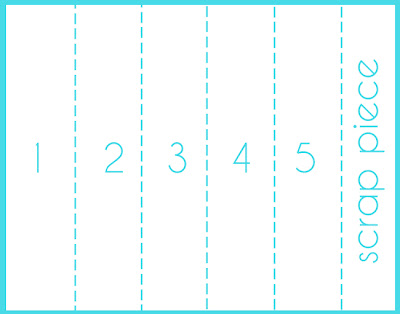 To show you how it ended up shaking out, I created this little diagram that is to scale of a posterboard {standard size of 22″x28″} of how I cut each one. I got five strips out of each board. Before starting this project, I read through all the 172 comments the Nester got on this project…and I was a little amazed that one commenter had made this and needed twelve sheets of posterboard. I’m sure it turned out beautifully and is an incredible masterpiece…but I stuck with the four pieces recommended by the Nester. 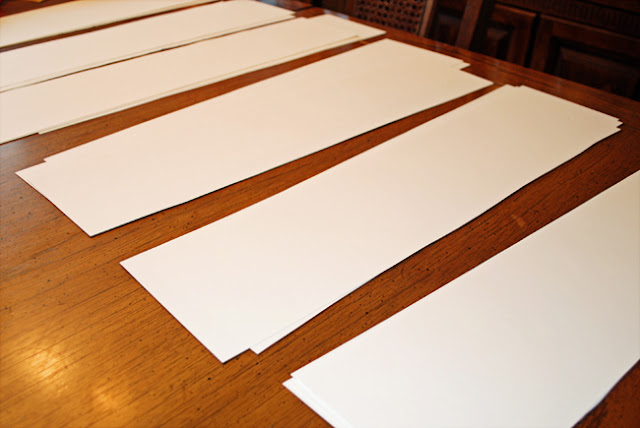 The strips…ready for their points. 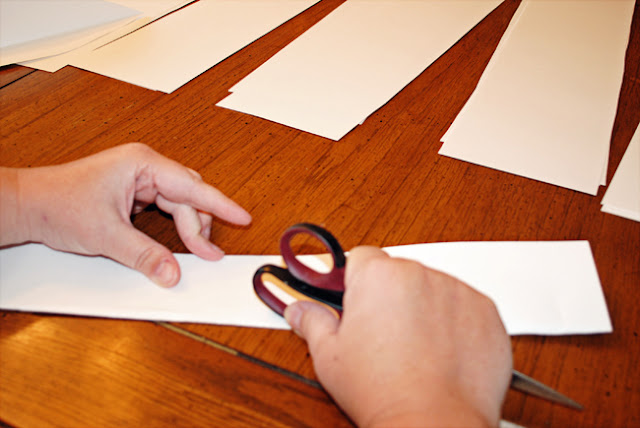 Fold each piece in half the long way. And…because I’m totally OCD, I used the handle of my scissors to apply pressure for an even smoother crease. The crease also adds tons of dimension to the final piece, so this is an important step.

I have a really long, boring story of how I lost a lot of friends in college due to my OCD folding requests. I about went postal on my event-planning committee for our club when they didn’t use their scissor handles to make perfect creases {which was clearly explained to them at invitation-folding orientation…helloooooo} in the 200 invitations we were putting together. It’s like I’m totally unreasonable or something. {Okay, maybe a little, but I digress}. If any club sisters are reading this, please don’t hate me for my OCD tendencies. It was all for the love of beautifully folded invitations.

Yeah. They were tri-folds, too. Ouch. 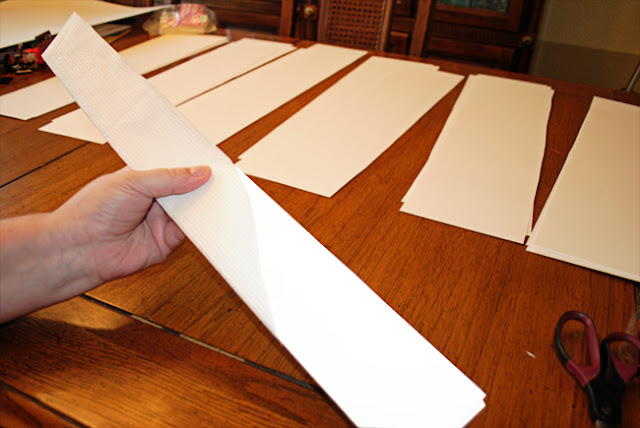 Using the paper towel made previously {pictured several photos above}, fold it around the strips to cut your point. You can line the bottom flat edge of it up with the bottom edge of your strip. Then cut around the point. To be honest, I got a little annoyed with myself because I kept cutting into the paper towel {it was hard to avoid}…so I ended up using an already-cut pointed strip for my template from about the third strip on. 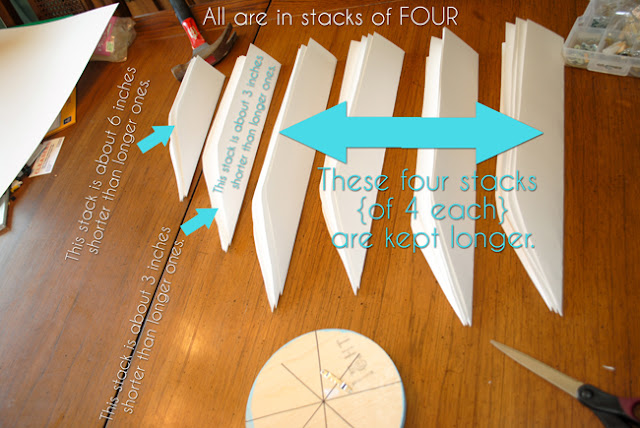 In total, I cut 24 strips {that’s how many I counted on the Nester’s project}…and that’s how many are pictured above. However, once I started gluing, I only used 20 of the 24. So I had four {from one of the longest sections} left over. Not sure where I missed four…maybe my final project {or maybe my mirror} was smaller than hers? It truly didn’t matter in the end. As you can see from the above pic {that I went a little overboard on with verbage}, two of the sets are slightly smaller than the others. I just sort of eye-balled this short-cutting part. Reaaaaal technical.

{I’m such an oxymoron sometimes: I go to great lengths for perfect creases but eye ball cuts? Weird.} 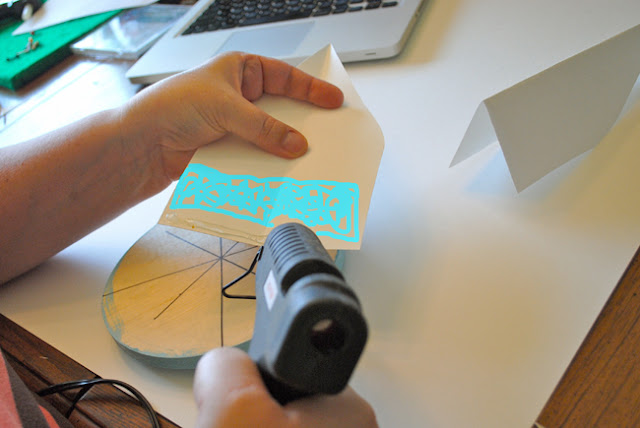 I started with my shorty strips {since they go on first}. I originally just did a bead of glue along the bottom…but then went back and filled in that whole area you see with glue. Since these are the base points, most of the other boards will be glued to these….so these need to stick. Really well.

Work in groups of four. And feel free to draw compass-like lines on the back of your board-circle-thing to make sure it all lines up. You’ll put them down in a compass-like layout. 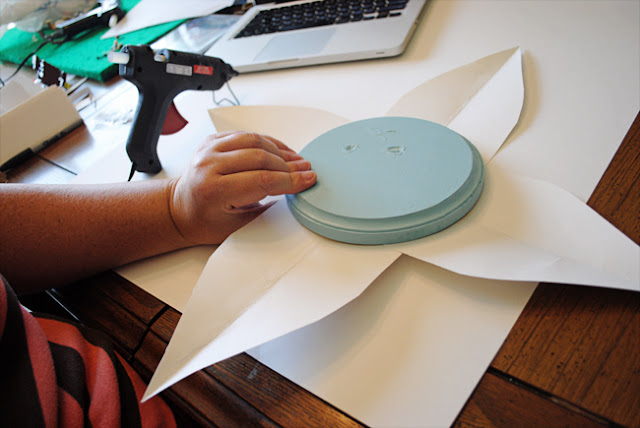 These were the first four. After getting these on, it all went pretty fast. Just rotate to the next set of “compass lines” to glue the next set. After a few sets were on, I just started eyeballing {again}. 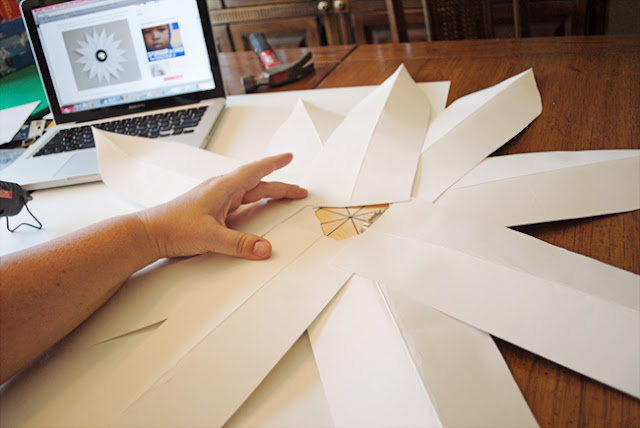 These are all of the strips glued onto the board {and to each other}. You can see the little hanging clip that I added before gluing all the strips down. Feel free to use a soda can tab if you don’t have one of these hangers on hand. You can also see The Nester’s post there on my computer! :) 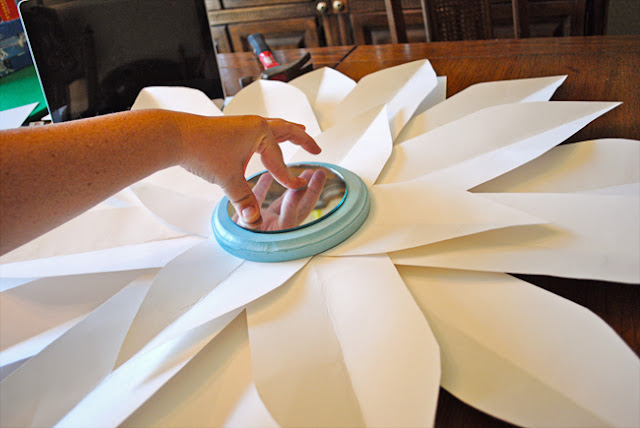 After getting all of the strips glued on, I flipped it over and hot glued the mirror on the front {I just used one, but two actually come in the packages….if this one ever falls off and breaks, please remind me that I put the spare in the top right drawer of that dresser there. Please and thank you.}

And there you have it. I may have way over-complicated a rather simple project…but as I mentioned above, I’m OCD {and super type A}. Over-complicating is the only way I know how to do things. But, thanks for loving me anyway. 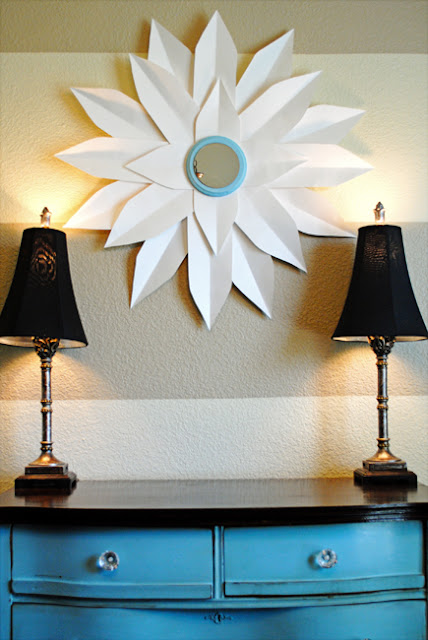 This site uses Akismet to reduce spam. Learn how your comment data is processed.

Fashion Trends for Over Fifty

Fall Tablescape in Lavender and White

How To Make a Faux Pumpkin Centerpiece

70+ Crafts and Decorating Tips for Fall

What Meegan Makes and all it’s content, pictures, ideas, etc. are original ideas and copyright protected.

Using content including but not limited to: designs, original ideas, photos, posts, etc. is prohibited.

Please ask permission before using any content from my blog for any reason and if there is any question.

FEATURED IN EVERYTHING HOME MAGAZINE

MY OWN RECIPE WAS FEATURED